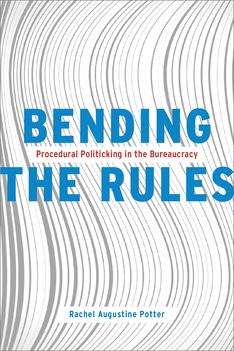 Bending the Rules: Procedural Politicking in the Bureaucracy
University of Chicago Press, 2019.

**Winner of the 2019 Richard E. Neustadt Award for the best book on executive politics, awarded by the American Political Science Association

**Winner of the 2020 Louis Brownlow Award for the best book on public administration, awarded by the National Academy of Public Administration

Who determines the fuel standards for our cars? What about whether Plan B, the morning-after pill, is sold at the local pharmacy? Many people assume such important and controversial policy decisions originate in the halls of Congress. But the choreographed actions of Congress and the president account for only a small portion of the laws created in the United States. By some estimates, more than ninety percent of law is created by administrative rules issued by federal agencies like the Environmental Protection Agency and the Department of Health and Human Services, where unelected bureaucrats with particular policy goals and preferences respond to the incentives created by a complex, procedure-bound rulemaking process.

With Bending the Rules, Rachel Augustine Potter shows that rulemaking is not the rote administrative activity it is commonly imagined to be but rather an intensely political activity in its own right. Because rulemaking occurs in a separation of powers system, bureaucrats are not free to implement their preferred policies unimpeded: the president, Congress, and the courts can all get involved in the process, often at the bidding of affected interest groups. However, rather than capitulating to demands, bureaucrats routinely employ “procedural politicking,” using their deep knowledge of the process to strategically insulate their proposals from political scrutiny and interference. Tracing the rulemaking process from when an agency first begins working on a rule to when it completes that regulatory action, Potter show how bureaucrats use procedures to resist interference from Congress, the President, and the courts at each stage of the process. This exercise reveals that unelected bureaucrats wield considerable influence over the direction of public policy in the United States.